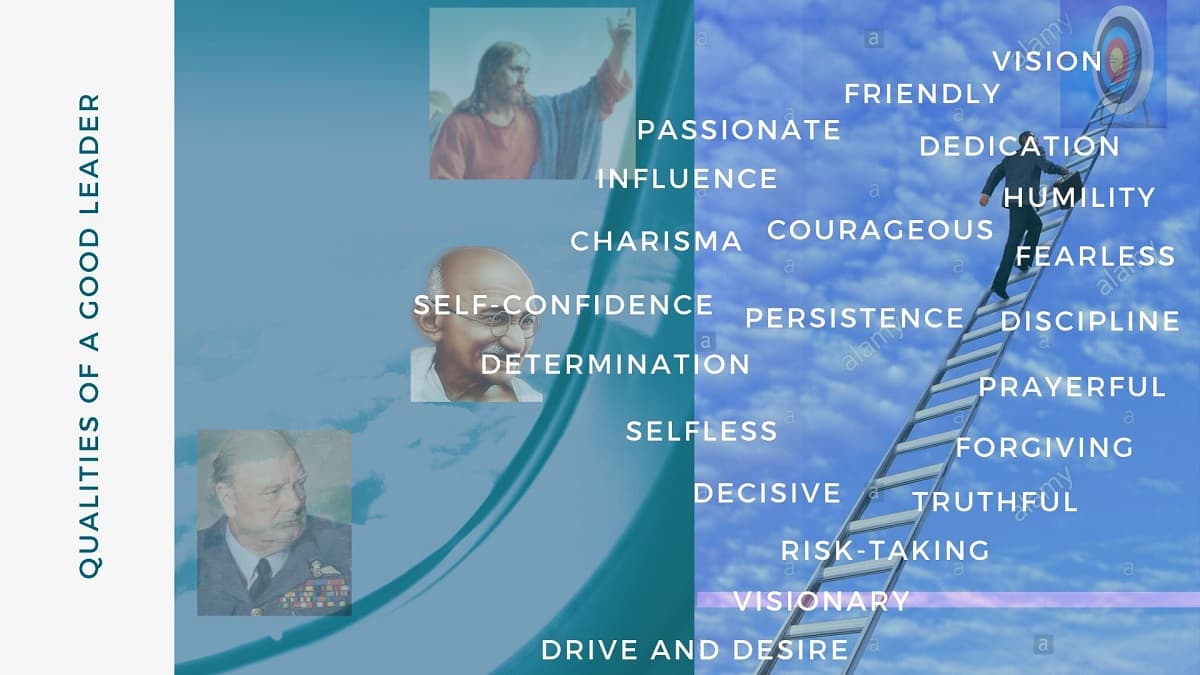 Advertisements
Summary of Headings Hide Headings
Outstanding Leaders and their Qualities
Adolph Hitler: a powerful leader
Mahatma Gandhi: a meticulous leader
Siddhartha Gautama: a noble leader
Learn Web Designing free
Winston Churchill: a courageous leader
Start a Career in Graphics Design
Who is a Good Leader?
The Greatest Leader of all Time
Are you a leader?
Qualities of a Good Leader
The Vision and You

Who is a good leader? What are the qualities of a good leader? Over the years, leaders have evolved; some commanding hundreds, thousands, millions and billions of followers. Who among these notable leaders can we ascribe the title, ‘a good leader’?

Adolph Hitler, Mahatma Gandhi, Buddha, Winston Churchill, Jesus Christ are all leaders at one time. Though all dead, some are still commanding millions, and even billions of followers. What did they do differently?

Outstanding Leaders and their Qualities

Adolph Hitler was the leader of the Nazi party in Germany. He assumed the position of Chancellor and Fuhrer of Germany between 1933 and 1945. His decisions led to the Second World War and the death of over 50million people.

It was his desire, drive and persistence to eliminate the Jews and annex the German territory that led to the Second World War.

The question I want to pose to us is: did Hitler exhibit the qualities of a good leader? If he did, why then was he seen as evil?

Another great leader that the world cannot forget in a hurry is Mahatma Gandhi. He exhibited sound qualities of a good leader during his nationalist struggle. Being a lawyer, a politician and a nationalist, he was able to lead India to independence without violence.

Gandhi founded the Indian Congress in South-Africa and preached no violence in his pursuit of Indian freedom from British rule. Though imprisoned several times in South Africa and India, he never gave in to violence. I want to believe that Nelson Mandela got his inspiration from Gandhi.

Gandhi exhibited many qualities of a good leader which we cannot enumerate. If we compare the qualities of Hitler and Gandhi, they seem the same with few exceptions. Identify the exceptions.

Buddha is another man who is still commanding followership, even at death. Statistics show that there are about 535million followers of Buddhism in the world.

Buddhism originated in India and was pioneered by Prince Siddhartha Gautama. Buddha means ‘awaken’. Prince Gautama was awakened when he realized that opulence cannot save him from old age, sickness and death.

In his pursuit of peace and freedom, he punished his body through extreme fasting, but could not realize his dreams. Then he settled for mental discipline through meditation.

Through dedicated meditation, he was awakened and enlightened. He decided to make others enlightened and free through his teachings. In the 6th century BCE, he founded the original order of Buddhist nuns and monks. He became a great teacher who walked the villages teaching many how to realize enlightenment.

Till today, he still has about 488million followers who believed and follows his teachings. What was it about Prince Gautama that made him such a great leader?

During the time Hitler spread fear and terror, one man was able to stand and led his country to victory. That man is Sir Winston Leonard Spencer Churchill, the British Prime Minister between 1940 and 1945.

Churchill was the leader of the British Conservative Party between 1940 – 1955, an orator and a fearless Military officer. His strategic planning, coordination and leadership skills helped him to form allied powers during World War II. And eventually led Britain to victory.

Start a Career in Graphics Design

What was it about Churchill that gave him victory over Hitler?

Who is a Good Leader?

Aside from the aforementioned leaders, other great leaders have made impact in the world and gone. There are the likes of George Washington, who is called the father of America, Abraham Lincoln who through his leadership qualities made sure that America remains united.

We cannot forget our own Nelson Mandela who forfeited his freedom for the apartheid policy in South Africa. What about Fidel Castro who led the Cuban revolution? Don’t forget the influence Abu al-Quasim Mohammad still has on about 1.8 billion Muslims today.

The Greatest Leader of all Time

Should we also forget in a hurry the greatest leader that ever lived on the earth, our Lord Jesus Christ? He was the only leader that died for the freedom of His followers. Today, He has a followership of about 2.19 billion of the world population. His only requirement is for you to believe in Him (John 14:12).

Are you a leader?

We all have dreams, visions, goals, and targets we set for ourselves. The truth is that no vision or dream can be accomplished without the help of others. Hence, we are leaders in one way or the other, commanding ones, tens, hundreds and thousands. Some in our families, churches, various institutions, and society. What qualities of a good leader can we imbibe in our pursuit?

When I thought of the above, two people came to my mind: Moses and Nehemiah. Moses is a significant figure, but Nehemiah wasn’t too significant, yet he accomplished his goal in the midst of great oppositions, and no resources.

Qualities of a Good Leader

Let us look at Nehemiah, the governor of Persian Judea during the reign of King Artaxerxes 1 of Persia. Nehemiah embodies the qualities of a good leader, both as a staff in King’s palace and in God’s service. There was no difference in his service as a civil servant and as a leader.

He conceived in his heart the problem of God’s people and was determined to solve it.

That Hanani, one of my brethren, came, he and certain men of Judah; and I asked them concerning the Jews that had escaped, which were left of the captivity, and concerning Jerusalem. And they said unto me, The remnant that are left of the captivity there in the province are in great affliction and reproach: the wall of Jerusalem also is broken down, and the gates thereof are burned with fire. And it came to pass, when I heard these words, that I sat down and wept, and mourned certain days, and fasted, and prayed before the God of heaven,  (Nehemiah: 1: 2 – 4)

God has placed in every man the capacity to be a solution to the problem he conceived. This is why he/she was able to conceive the problem in the first place. Our inability to solve a problem arises only when we put our interest first, before God’s interest.

If you look around you now, you will see problems, and there is a burning desire inside of you to do something. The position you are occupying now is not for granted, God placed you there for a reason. What are you waiting for? At the ripe of time; do not give in to selfish desire.

For Nehemiah, he was the King’s cupbearer; an important position in the Persian kingdom. His position brought intimacy between him and the King such that the king observed his countenance. “Wherefore the King said unto me, Why is thy countenance sad, see thou art not sick? …” (Nehemiah 2:2).

It was an overwhelming task for Nehemiah, but he brought the people together and they rebuild the walls.

How did he do it, in time when Israel was in disarray, and when resources were scarce? Let’s look at the Leadership qualities that gave Nehemiah an edge.

“If it please the king, and if thy servant have found favour in thy sight, that thou wouldest send me unto Judah, unto the city of my fathers’ sepulchres, that I may build it” (Nehemiah 2:5).

He understood that rebuilding the city walls would affect the emotional, mental, social and religious lives of his people. He had a clear vision, which also motivated the people to work with him.

Nehemiah prayed from conception until the vision was accomplished.

The Vision and You

These leaders were outstanding because each led at a time of crises, yet each come out victorious. When their traits are summed up, we can classify them as the qualities of a good leader.

Nehemiah exhibited the qualities of a good leader, more so as seen in the lives of the great leaders aforementioned. No matter where you find yourself – working place, school, church, community or in the church, you should always abide by the exemplary traits found in Nehemiah. Nehemiah is the embodiment of a great leader.

Do you want to achieve your set goals in 2020? A good leader leads from inside to outside. At the beginning of every New Year, many people will resolve what to and what not to do. Experience has shown that most resolutions do not go past the first quarter of the year. In the words of Tony Robins, “80% of New Year’s resolutions fail in February.”

This is not because people do not want to continue with their resolution, but because they did not plan ahead of time. In this article, we discussed the critical qualities of a good leader using Nehemiah as case study. The qualities of these great leaders can transform any vision into reality.

Do you really have a goal? Explore and master the qualities that will make you successful by clicking here. What qualities do you think we left out?